I bought a Gemma last summer after playing with Arduino, and unfortunately it sat in my Arduino tackle box unused the whole year.  For some reason, I couldn’t find a project that didn’t require soldering.

Then I started looking up e-textile sewing projects on sparkfun.com and found the Lilypad I’d heard so much about. I bought a simple Firefly Jar kit and finished my first sewing circuit project in under an hour!

My first etextile how to thx to awes @sparkfun #lilypad kit! I’ve been wanting to sew circuits for the last year! https://t.co/ANBdpex55j

I had so much fun that I checked with my local teen librarian Dana Tucker to see if she’d want to collaborate on a wearable class this summer. We decided to make E-textile cuffs based on a lesson I found in Dr. Peppler’s Soft Circuits book.

It is a great resource for others who want to teach kids and teens how to sew circuits: Soft Circuits: Crafting E-fashion with DIY electronics by by Kylie Peppler and Melissa Gresalfi.

The night before I got really nervous about teaching the class and had a lot of self doubt that we could pull it off.

So how did it go?

It was amazing! Because collaborating with others makes things flow more smoothly.  Dana Tucker did a great job! She pre-cut the felt into cuff size, she had hot glue guns at the ready, a great array of notions for adding embellishments to projects, and she brought in an assistant who has a great working knowledge of sewing.

Getting ready to teach #teens how to sew circuits @dentonpubliclibrary ! #wearable #teched

We made copies of circuit diagrams, showed the kids my original project, and told them to design their own light-up wrist cuff.

Many of them were like, “What are we going to make? I don’t even know where to start?” I wish I could say they spent time drawing out designs, but it just didn’t go down like that.

Instead, I pulled out some felt and started adding notions, and told them, “Just get started. Start adding stuff and see where it takes you.”  From that point on the girls got really quiet and started making and crafting. They plugged in their headphones, or chatted quietly and started designing. One girl made a bracelet declaring her love for her favorite show, another made one based on her favorite band, while a third made many bracelets about her favorite video game “Legend of Zelda.”  A young boy came in and wanted to join in. We welcomed him and let everyone craft for about an hour.

When it came time for sewing circuits, I realized the diagram I gave them was too technical for them. So I walked around and spent a few minutes describing to the students how electricity flows in a loop and then had to create a loop with the conductive thread.  Many of them stared glassy eyed at me.

Then I realized, if I put the components on the diagrams, it might click for the kids. 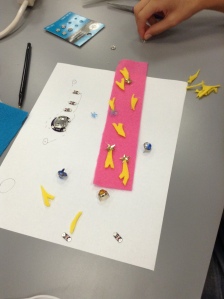 Bracelet next to diagram

Close up of diagram with components

They got busy sewing even though many had never sewed before! Imagine your first sewing project as an e-textile?!

I could tell that many really didn’t understand the concept of electricity and circuits UNTIL their project didn’t work.  At which point I explained again how the electricity needed to flow in a loop and none of the negative threads could touch the positive threads or they would get a short circuit.

And that is what taught them the concept.  Having a need to understand the concept in order for their project to work.

Here are some of their finished products: 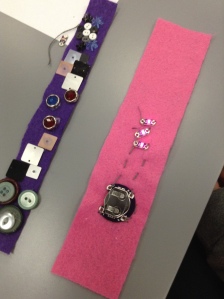 Under the hidden circuit bracelet 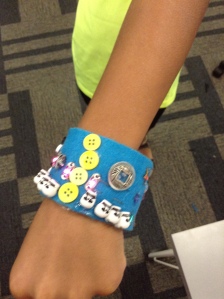 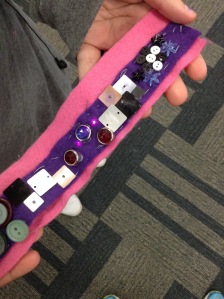 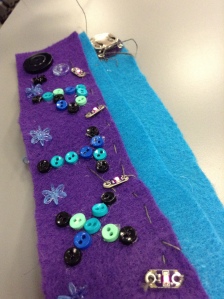 Thoughts on our process:

10 thoughts on “Sewing Circuits at DPL”